O come, let us adore Him
All ye choirs of angels; O sing, all ye blissful ones of heav'n above

Walking in HUMILITY with GOD

True honor, in the eyes of God,
is found when we serve without notice and give without recognition.

Easter / Lent Season - Togetherness, we are one with CHRIST!!!

As we approach Lenten Season, we seek for the grace to be fully present with love and compassion to the suffering of our time. By doing so, we prepare our hearts to receive God's love born as an infant messiah. Jesus reminds us not to be led astray or prepare your defense in advance. Our lives lived in faithful witness to the kingdom that is to become a sign of joy and hope for today. In 2016, at the end of the Jubilee Year of Mercy. Pope Francis named the 33th Sunday in the Ordinary Time the World Day of the Poor. The Pope entreats the faithful to reach out in solidarity to those most in need. This calls us to live our waiting with commitment, stepping out of certainties and comforts, and entering vulnerability.

Throughout our times we get all kinds of requests. One such special invitation occurred long ago, but still, even today, it remains out as one of the most extraordinary of all.

I'm referring to the Passion of Christ and the invitation to visit the scenes of the events in Jerusalem and walked the traditional route from the supposed location of Pilate's house to Calvary. Jesus continued these invitations throughout His earthly ministry. He called the depressed to rest in Him, the lost to discover their way in Him. He urged the sick, the blind, and the lame to be healed.

Highlights - FCCCPC and You - Lenten recollection Presentation - A time to reflect the great sacrifies by Bro. Don Quilao.

Highlights - Stations of the Cross Presentation - FCCCPC and You - A devotion that reflects on Jesus' final days on Earth.

While Christmas is a holiday celebrated worldwide, some Filipino traditions fully embraced and have modified into something that can quite call "ours".. Below are the things and traditions that are uniquely Pinoy. Completing the Simbang Gabi or Misa de Gallo is in almost everyone's bucket list. It is a practice originated in the early Spanish colonial period as a practical compromise for Filipino farmers who began working before sunrise, to avoid working in the fields under the heat of the sun. Simbang gabi is a nine-day series of masses to honor Blessed Virgin Mary. The mass starts from December 16 to Christmas eve. Filipinos wake up before the crackdown to attend the mass hoping to have a granted wish once they complete the nine days.

It is a practice originated in the early Spanish colonial period as a practical compromise for Filipino farmers who began working before sunrise, to avoid working in the fields under the heat of the sun. Simbang gabi is a nine-day series of masses to honor Blessed Virgin Mary. The mass starts from December 16 to Christmas eve. Filipinos wake up before the crackdown to attend the mass hoping to have a granted wish once they complete the nine days.

We had excellent speakers in the persons of Arch. Ramon Argulles and Bro. Don Quilao during the 20th AFCCPC National Convention from October 4 to 6, 2019 at the Sheraton Vancouver Airport Hotel, 7551 Westminster Highway Richmond, BC Canada, V6X 1A3. Bro. Bob Canton also gave talks and led the Healing Service. Bro. Bob Canton, National Coordinator would like to congratulate the newly installed officers namely, Sis. Ging Mangaliman, the Asst. National Coordinator for Administration, 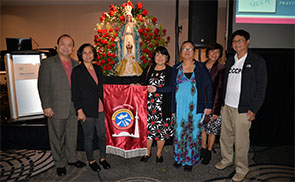 the indefatigable Sis. Lennie David and her equally indefatigable daughter, Ethelyn David, as Regional Coordinators from Vancouver, BC, representing the Western Canada Region and the very creative and resourceful and dependable, Brod Tony Pilien, from Toronto, Canada. Brod Tony is the AFCCPC's Director of Information. He represents the Eastern Canada Region of the AFCCPC. Kudos to them all.
On a very positive note, the FCCCPC sends 5 delegates (Bro. Don Quilao, Sisters Norma Quilao, Fe Keheler, Caridad Labindao, Minda Pilien and Bro. Tony Pilien) to the Convention. Many people have been touched, healed, and have been evangelized by the power of the Holy Spirit.

Level of Rest in coming home

When we are overwhelmed by worries, work, or fear, Jesus' words in the Scriptures are affirming and calming, "Come to me, all you who labour and are overburdened, and I will give you rest."
Bro. Don Quilao will discuss how we seek a rest from stress through Jesus. We seek the rest from stress that you promise because God's love us.

Who is Bro. Don Quilao - Study with me from the talk - Heart of a Servant (brilliant short movies you can watch in one go )

FCCCPC Grand Assembly 2018 organized by the Filipino Canadian Catholic Charismatic Prayer Communties, Ontario, Canada on August 25 2018 at the Korean Canadian Cultural Association. It was soul-elevating and gave a heavenly experience that stirred over 500 faithfuls. The theme of this event was "Transforming in Christ".

As I think about sharing God's promise of renewal, I remember FCCCPC's Vision To help strengthen and deepen the faith of the Filipino Christian communities. Bro. Don Quilao, Head Servant of the FCCCPC said "Let us praise and thank our Lord & Saviour Jesus Christ, one with God the Father and the Holy Spirit, for the bequest of gifts & vocation in our communities during the 2018 - FCCCPC Grand Assembly. It is always appropriate all these gifts to the Glory and Honour of God the Father in Heaven and for further unity among us." Bro. Bob Canton, National Coordinator of The Alliance of Filipino Catholic Charismatic Prayer Communities (AFCCPC) stated, I am also touched by the cooperation of exhibited by everyone(I would like to name all of you but I believe you know it's not practical for me to do so) including all volunteers and everybody who were involved in the planning of the Grand Assembly and contributing their precious talents, and time, and efforts to serve in any area they were needed.

2020 Plans and Actions of the Archdiocese of Toronto    Let us together spread the Gospel of Jesus Christ  To God be the Glory.
MUST KNOW... 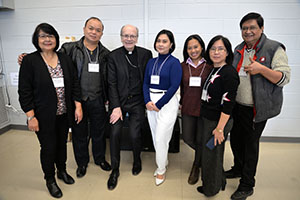 The Annual Symposium started by meeting each delegate, followed by presenting the latest plans and action of the Archdiocese of Toronto under His Eminence Cardinal Thomas Collins, Toronto, Ontario, Canada. It was a delightful consultation, sharing updates and information at the Archdiocese of Toronto which followed by dialogue to the Lay ministers. It was also lively presentation by Most Reverend Robert Kasun, CSB on "Cultivating the Virtues that Underlie Holiness". It ended by Celebration of the Holy mass and lunch. The picture is our Bro. Don Quilao (FCCCPC Head Servant), Most Reverend Robert Kasun and FCCCPC members from the Living for Christ Prayer Community and El Shaddai DWXI Prayer Partners Fellowship International INC, Toronto Chapter.
Highlights - Photos of the event Toronto Archdiocesan Lay Associations, Movements & Organizations.
Plans and activities of the Archdiocese of Toronto Audio Gallery from the Most Reverend Bishop Robert Kasun

Jesus I trust in you 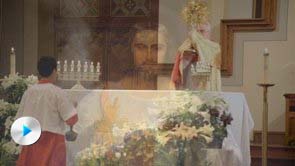 God's message given through St. Faustina to the world to turn to His mercy is reminder to trust the Divine Mercy in Jesus and seek His forgiveness. And as Christ is merciful, so, too, are we instructed to be merciful to others. The message of Divine Mercy has become an integral part of Catholic faith, including the celebration of the Feast of Divine Mercy on the Sunday after Easter.

You already have it.
by Bro Bo Sanchez


The FCCCPC is congratulating Beloved Disciples of Jesus for the successful Catholic Life in the Spirit Seminar last November 16-17, 2019. They held it at the Upper Canada Lodge's Hall, 1266 Bathurst St., North York, ON M3H-5Y7 (Across Earl Bale Park). It was very rewarding Seminar. Their speakers were Rev. Fr. Ben Ebcas Jr, Dec. Bob Rosales, and Br. Don Quilao. You are indeed, an instrument to evangelize the world in spreading the Gospel for Jesus Christ. To God be the Glory.