FCCCPC General Assembly is held quarterly, at which time more than 20 Charismatic Prayer Communities gather for praise and worship, sharing, studies of the faith, and Eucharistic Celebration. We operate under the guidance and direction of Most Reverend William McGrattan, D.D., Auxiliary Bishop and Vicar for Ethnic Communities, and our day to day governance is under the leadership of the following:

CHRONOLOGICAL HISTORY OF THE FCCCPC

July 1995: The Toronto delegation attended a Fil-Am Charismatic Convention for the first time in Philadelphia. Toronto chosen site of the 9th Conference.

May 1996: Toronto was officially annexed to the ALLIANCE OF FILIPINO CATHOLIC CHARISMATIC PRAYER COMMUNITIES North America.

January 1997: The Incorporation of the Filipino Canadian Catholic Charismatic Prayer Community as a Non-Profit Charitable Organization by Ralph Ferrer.

Nov 1998: Glenn Jover was appointed as one of the Board of Directors and Merle de Guzman appointed as National Secretary of AFCCPC North America.

Year 2007: First Assembly by The Lord is my Shepherd on Jan 27th at the John XXIII. 2nd Assembly by Holy Redeemers at St Peter's on April 15th. 3rd Assembly by El Shaddai at St Monica on Aug 19th. 4th Assembly by Joy of the Lord at the Holy Rosary on Nov. 25th. Leadership Seminars on July 14 and 28th at St. Monica Parish. 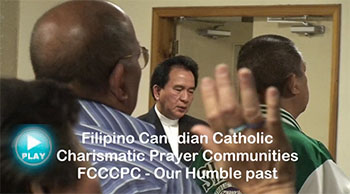 Who we are, our past and present

The Filipino Canadian Catholic Charismatic Prayer Communities (FCCCPC) is the umbrella organization of Filipino Charismatic Communities in Eastern Canada, recognized and endorsed by the Archdiocese of Toronto.

A Filipino Catholic Charismatic community is under the leadership of Filipinos, founded by Filipinos, and / or majority of its members are of Filipino heritage.

1. To help Filipino charismatic communities by giving spiritual and moral formation, training, seminars and conventions/ conferences.
2. To create a venue of consultation, discernment and counseling among community members.
3. To promote the spiritual and corporal works of mercy among its members and families.
4. To foster Christian fellowship among members.
5. To coordinate with the Archdiocese for the pastoral guidance, guideline and direction.

1. We are defenders of the Word.
2. We will be advocates of righteousness through witnessing and instruction.
3. We will be warriors of the Holy Spirit through praise and intercession.
4. We will be a refuge to the weak, the needy, and the persecuted.